1959 was the inaugural year of the prestigious Notre Dame Jazz Festival, which would later play a significant role in the ascension of the band in the national press. Taking top honors was the North Texas State College Lab Band.

The year would prove to be a watershed year for establishing a jazz ensemble at the University of Illinois. The pivotal event was the ninth biennial Festival of Contemporary Arts, held on the campus from March 1 to April 6, 1959. This festival, begun in 1945, offered programs across many disciplines, and was funded through the Star Course festival series.

This was the first festival to feature jazz music, and appears to be the first opportunity John Garvey had to conduct a student/faculty jazz ensemble with backing from the University. 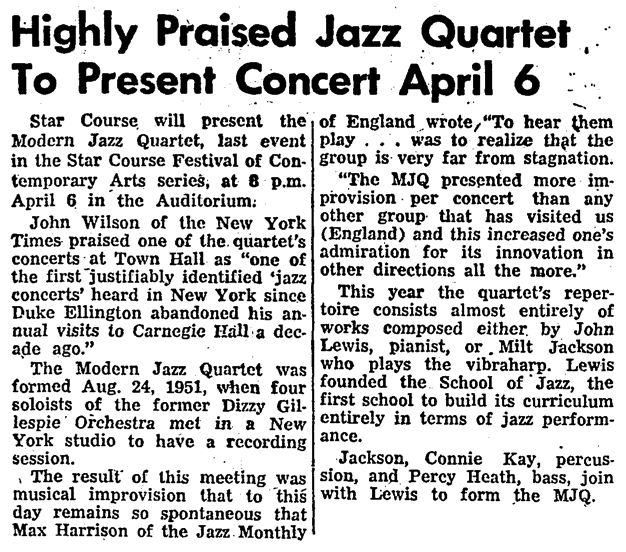 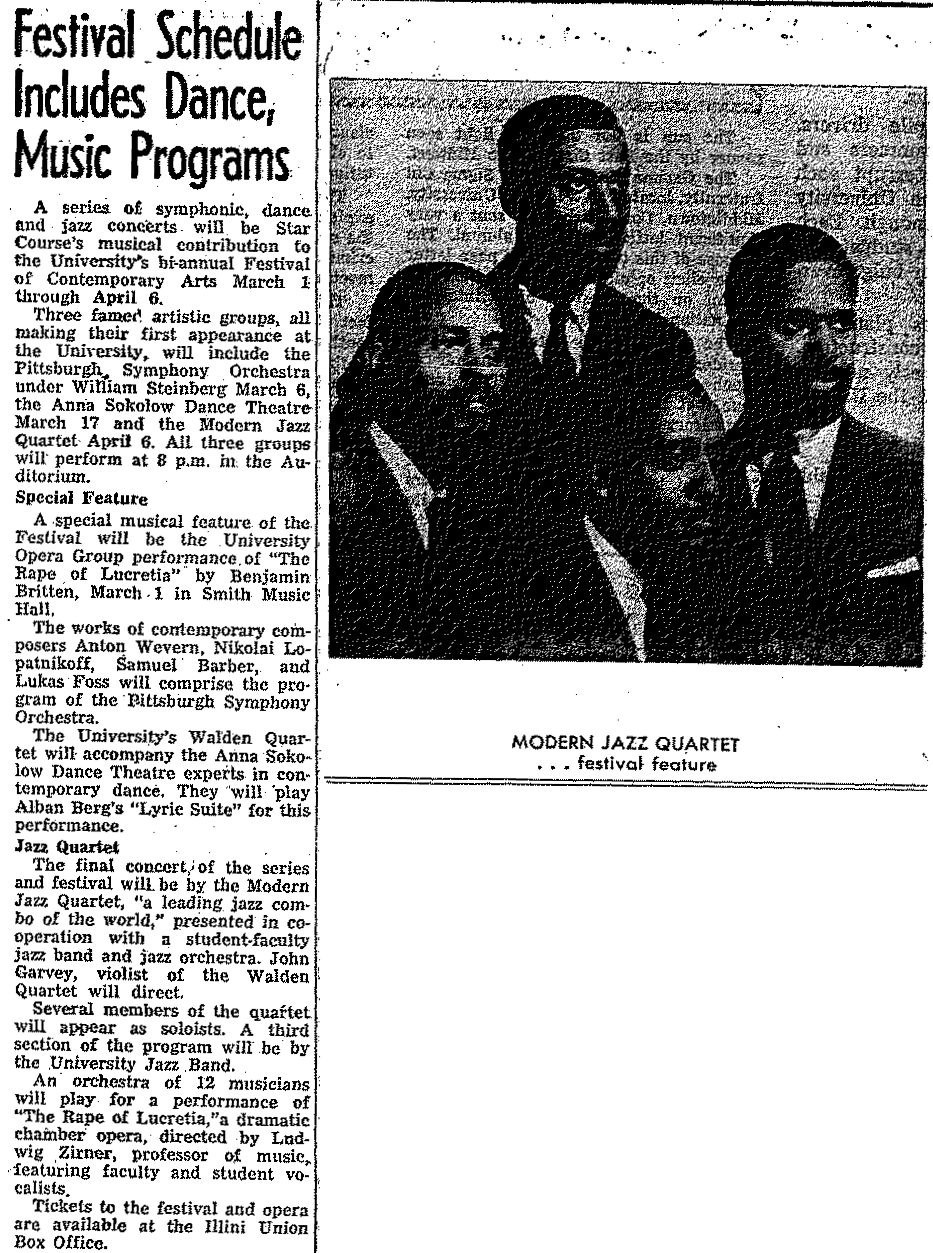 On Sunday, April 5, a special introductory presentation was offered by Gunther Schuller. Schuller, a composer of both jazz and atonal music, held the principle french horn position with the Metropolitan Opera Orchestra in New York. His presentation was a discussion of the works to be performed in the following concert, which included some of his own works. 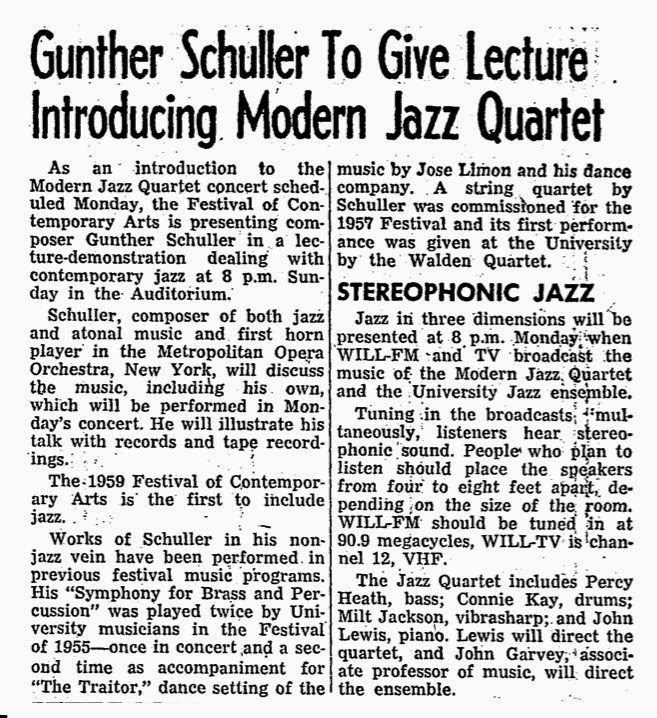 A (likely) recording of this presentation exists in the University of Illinois archives ("Series 6: Convocations, Symposia, Forums, and Guest Recitals, 1952-1986 > Box 231 > Reel 15: Gunther Schuller Lecture, 'The New Fusion of Jazz and Classical').

For this concert performance, John Garvey (then associate professor of music) formed and conducted an ensemble to perform Schuller's music. This was not, however, Garvey's first interaction with Schuller. The 1955 festival included his non-jazz composition "Symphony for Brass and Percussion", and a string quartet composition was commissioned for and premiered at the 1957 festival, performed by the Walden String Quartet, of which Garvey was a member.

Mentioned in a Daily Illini article describing the concert was the acquaintance of composer Harry Partch, whom Garvey had been working intimately at the University of Illinois, to John Lewis, the pianist for the MJQ. It is possible that this relationship provided Garvey with an inroad to securing the MJQ for this event. 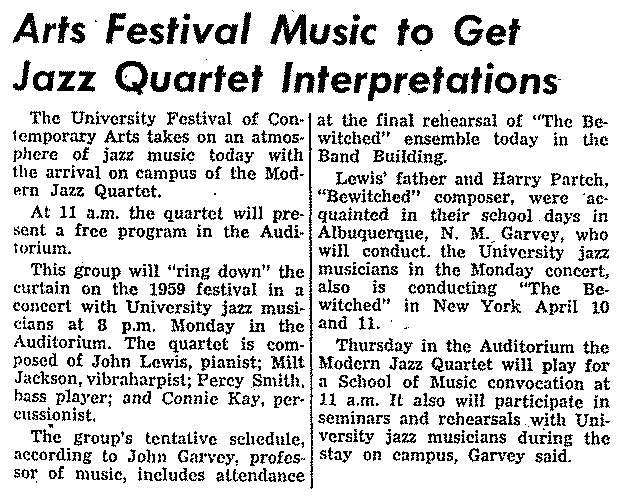 Also worthy of note is the involvement of Lewis and Schuller in the formation of the Lennox School of Jazz, which was in existence from 1957-1960. Garvey would be involved with this project the following year, so it is likely that the cooperation in forming this concert led to Garvey's involvement (where he would first encounter bassist and composer Chuck Israels, with whom he would work at the University of Illinois much later).

The concert was broadcast on university radio (WILL-FM) and television (WILL-TV). It is not yet known whether any record of this concert survives. 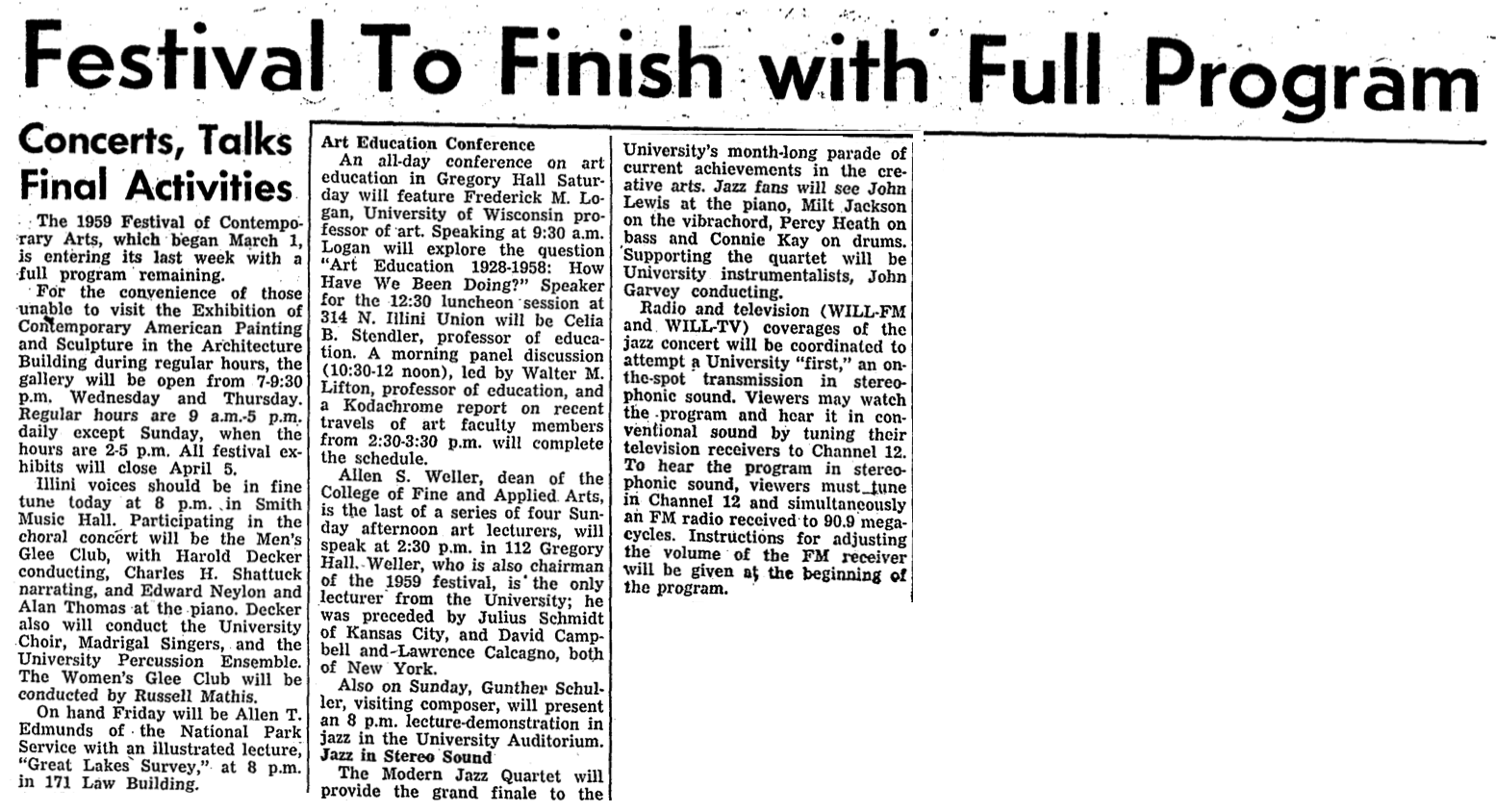 A review of the concert in the Daily Illini the following morning praised Garvey for his handling of the Shuller pieces and the solo performances of the MJQ, as well as pointing out Garvey's role in organizing a somewhat radical departure from the norm in presenting music at this festival. Not lost on the reviewer was the deleterious effect of having many musicians involved who had no practical experience playing jazz. 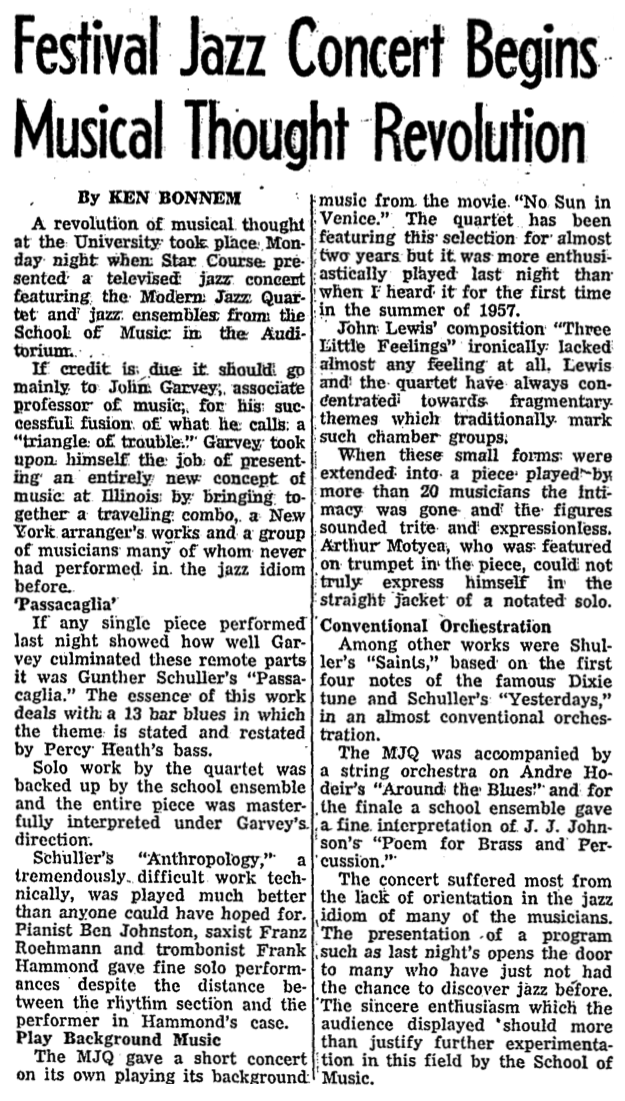 
With this concert in Garvey's back pocket, he could begin to try to make the case to the School of Music that they should offer a program. If that didn't work, he had other tricks up his sleeve.

The North Texas State College Lab Band, under the direction of Leon Breeden, took top honors the 1960 Notre Dame Collegiate Jazz Festival (as they did in 1959). Members of that group who would later be involved with Garvey's University of Illinois jazz band included Morgan Powell and Tom Wirtel.