In preparation for the band's 1969 tour of the USSR, several publicity photos were taken of the band performing in uniform. The date and location at which these photos were taken is not known at this time (photos courtesy of Bill Feldman). 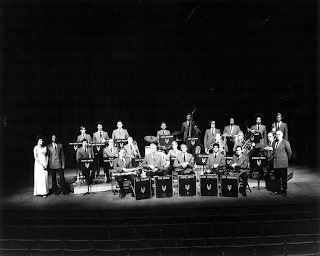 Full band (may not reflect personnel during tour) 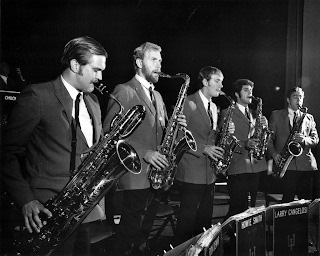 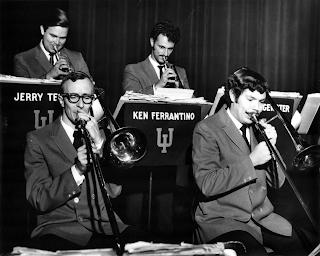 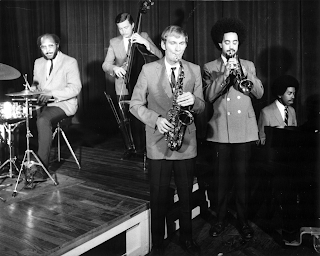 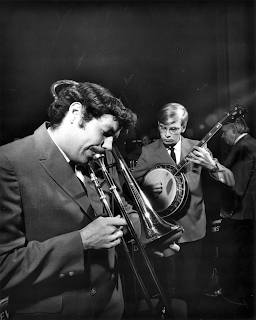 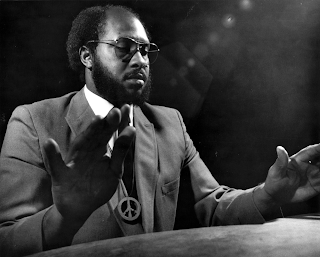 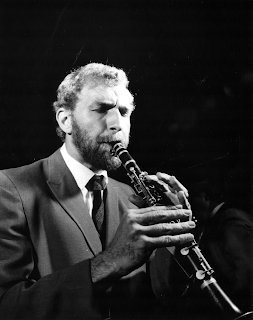 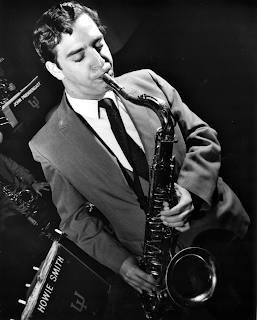 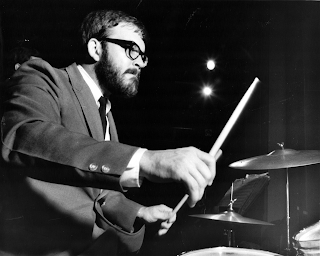 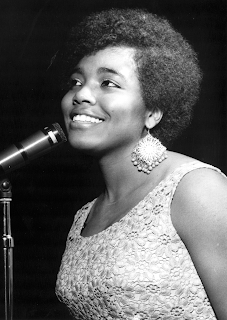 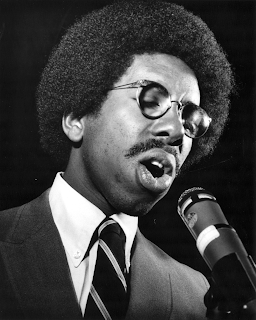 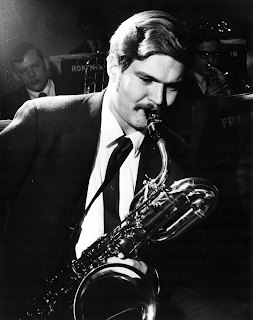 Singer DeeDee Bridgewater accompanied the band on its tour of the Soviet Union, and related the conditions the band encountered in an interview with author W. Roayl Stokes for his 2002 book Living the Jazz Life: Conversations with Forty Musicians about Their Careers in Jazz:

"When we went to Russia that first time in '68, we were followed everywhere. My first impression of Russia was KGB, bugs in my room, getting our luggage and having my clothes just totally in a mess when I'd open my suitcases, and being very, very paranoid. Walking down the street and seeing kids corning to me and waving, Russian kids, and then seeing little old ladies dragging them off the streets into alleys or into doorways and stuff. It was very, very strange."

"And going to jam sessions in the middle of the night, like you see in the movies, and having to get out of the bus with the bus lights off and go two-by-two to some meeting appointment and having special locks on the door and people rushing you in and down some stairs and then ending up in some basement with all these young Russian people, and playing music. It was very strange. I remember that at the end of the six-week tour I was afraid to sleep and really unhappy. That was the time when communism was really strong and the people all wore either navy blue, dark brown, or black. Everywhere you went they sold the same dress, the same suit, the same shoe; they all drove that one make of car. The couple of times I got to go out and was invited into people's homes, I was just amazed at how they lived-a whole family in one room with the toilet down the hall. Poverty, basically—just amazing poverty."

The band returned from the Soviet Union in January, 1970, reporting that audiences were somewhat bewildered at their first exposure to American jazz music. Garvey attributed it to "cultural differences". 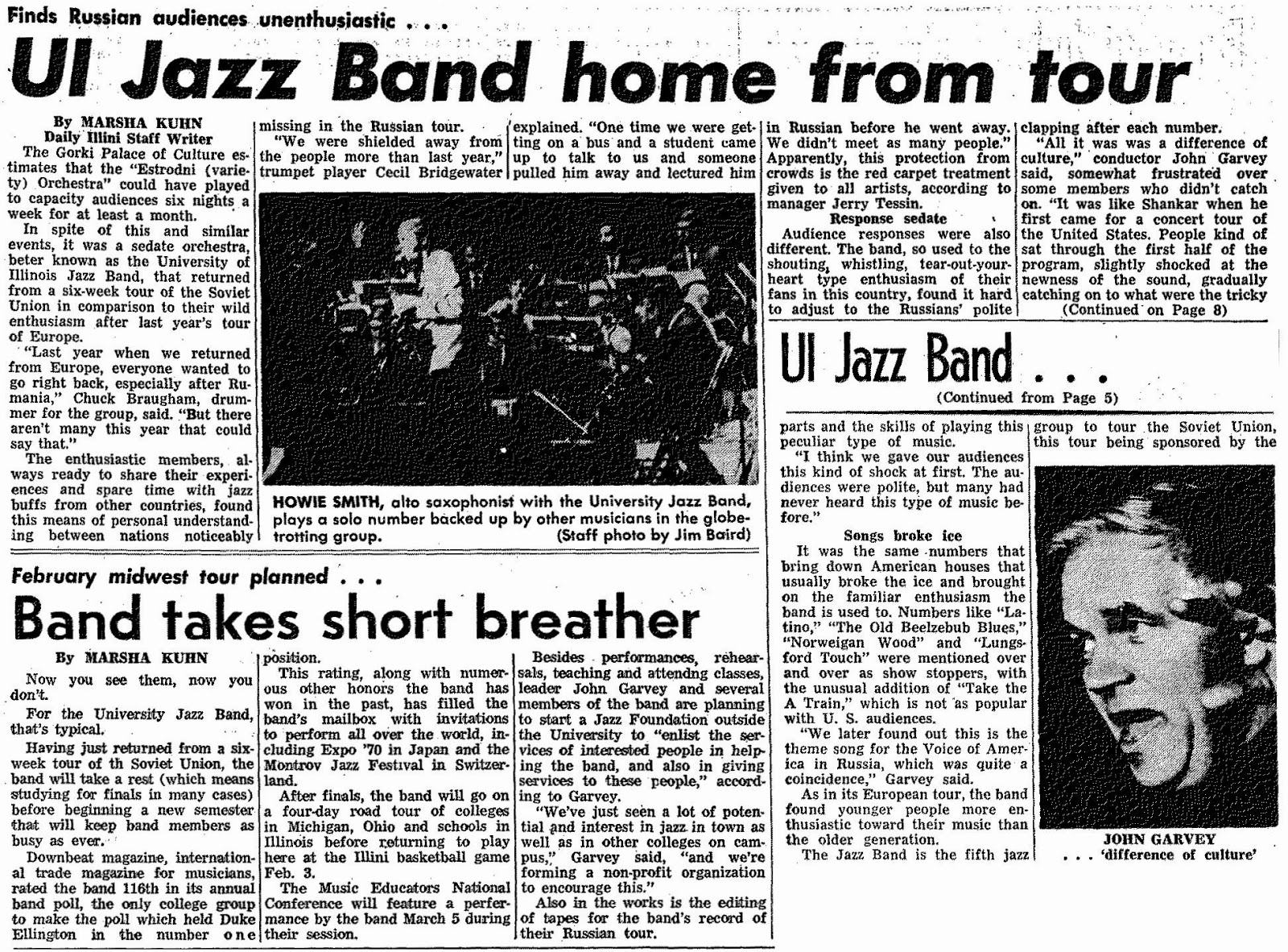 After returning to campus just in time to cram for finals, the band resumed its busy schedule by conducting a four-day tour of the Midwest from January 29 through February 1. Stops included appearances in Kalamazoo College, Baldwin-Wallace Conservatory (Berea, Ohio), Wooster College (Wooster, Ohio), and Sauk Valley College (Dixon, IL). Saxophonist Benny Carter reportedly performed with the band at Baldwin-Wallace.

Upon completion of the tour, the band returned to perform at the University of Illinois basketball game held at Assembly Hall on February 3, 1970.

On February 11, 1970, the Daily Illini ran a follow-up story suggesting that another State Department tour to the Soviet Union could possibly be in the offing. The article indicated that Garvey had traveled to Washington, D.C. over the semester break, and had been in contact with the State Department. Also mentioned are options to tour South America and Japan. 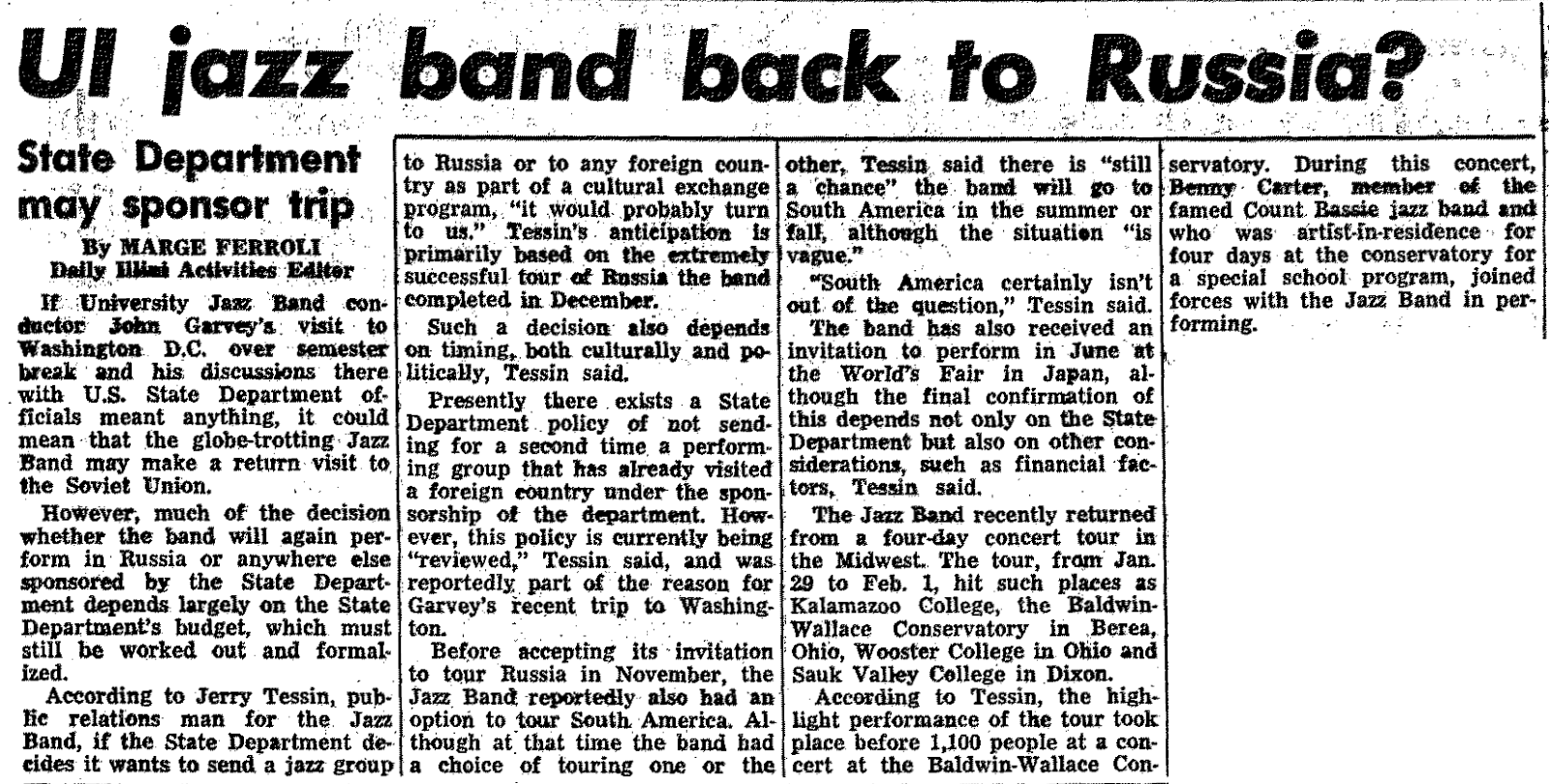 On April 23, 1970, the band appeared as part of a concert with the Contemporary Chamber Players (conducted by Ed London) and Ineluctable Modality (led by clarinetist Paul Zonn?). The concert included "Festival Piece" (Knapp), "Lord Save the Sinner" (Larry Dwyer), "Bird Merchant" (Morgan Powell), and "Rockin' in Rhythm" (arr. Phil Wilson). A recording of this concert is housed at the Sousa Archive (box 45, reel 1).

Following up on the tour of the Soviet Union, Downbeat editor (and former Collegiate Jazz Festival adjudicator) Dan Morgenstern conducted a wide-ranging interview of John Garvey for their April 30, 1970 issue. 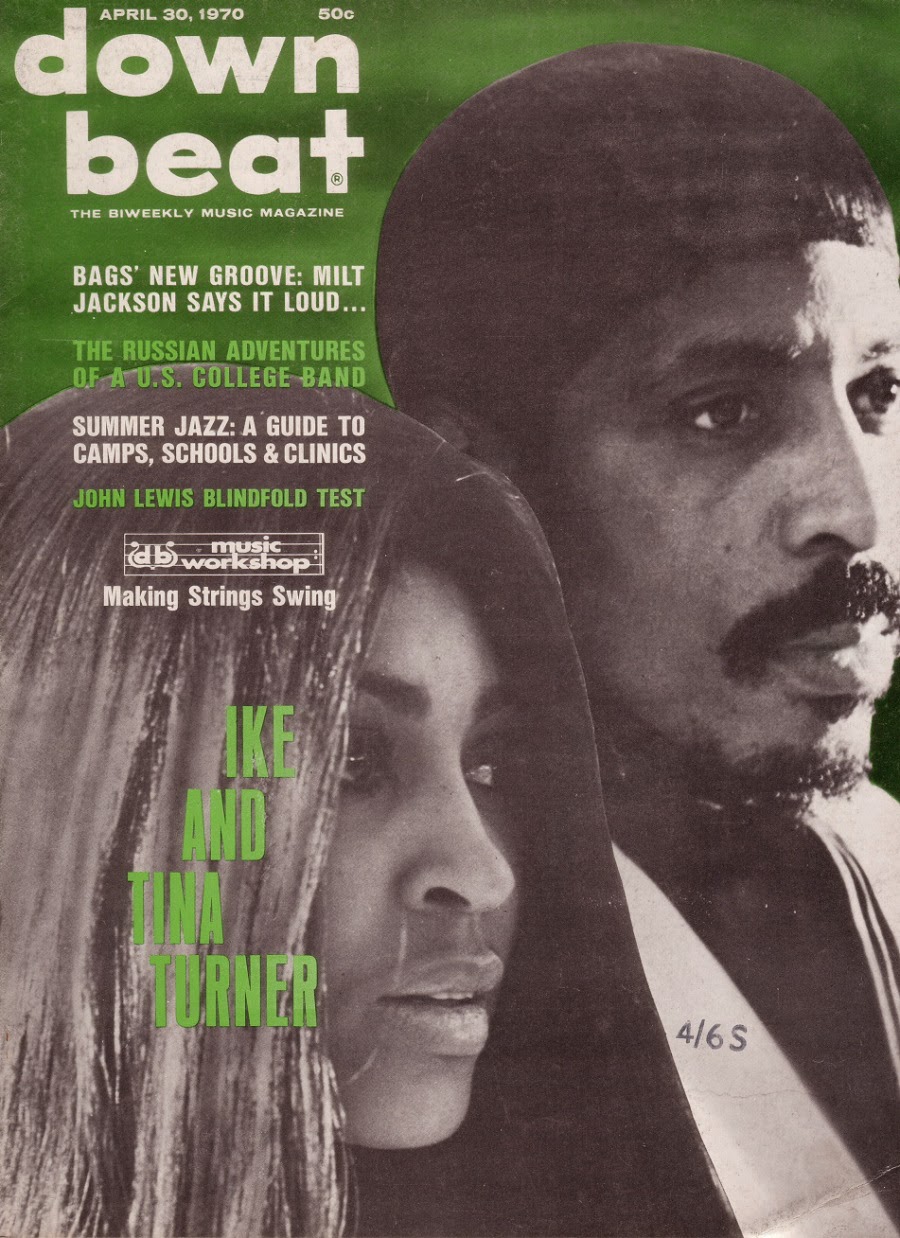 
The full text of this article may be found here.

On May 16-17, the American College Jazz Festival was held at Krannert Center for the Performing Arts on the University of Illinois campus for the first time (it would be held there again the following year). Guest artists at the festival included alto saxophonist Julian Adderley, baritone saxophonist Gerry Mulligan, trumpeter Clark Terry, saxophonist Benny Carter, vibes player Gary Burton, bassist Milt Hinton, and drummer Alan Dawson. 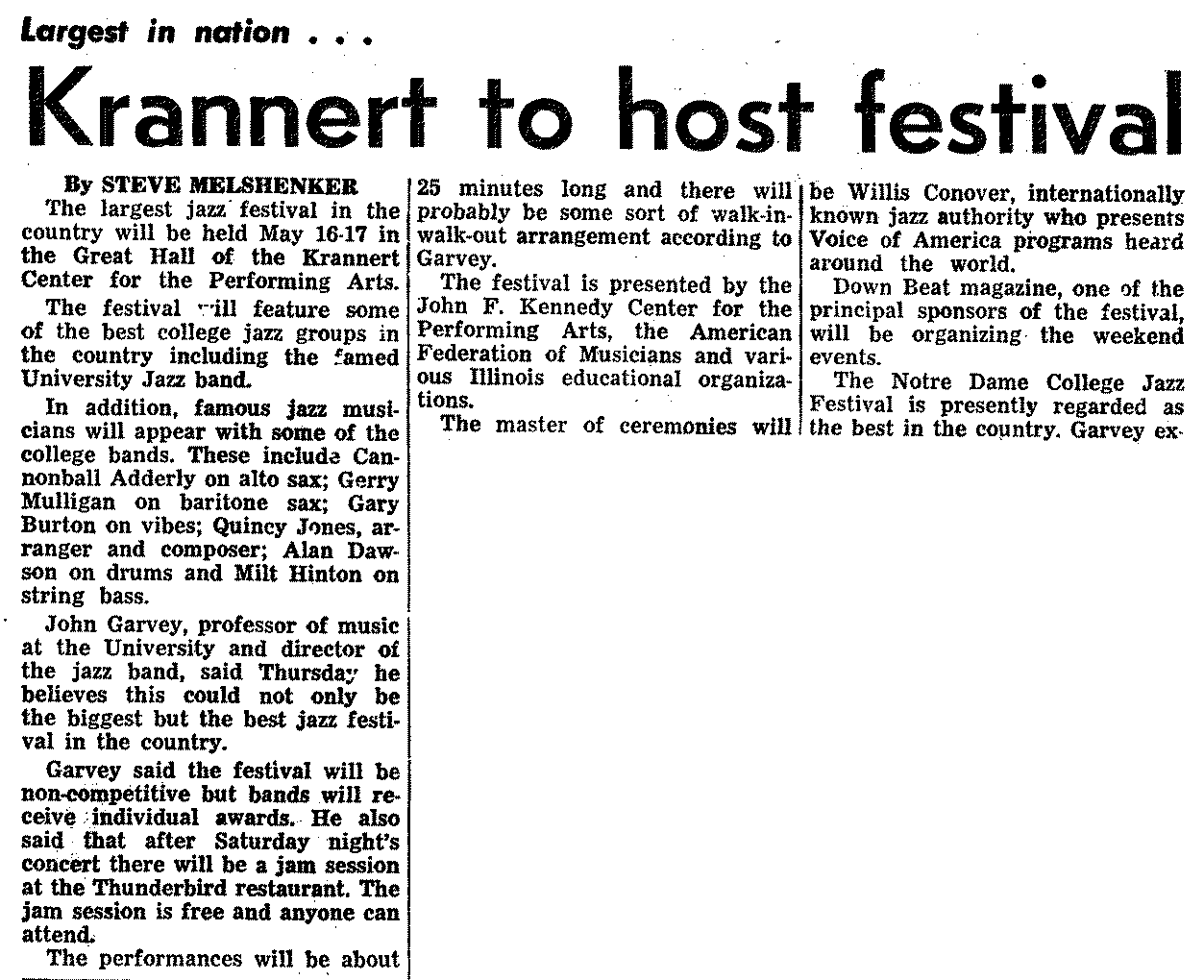 Also mentioned in the article is a evening jam session at the nearby Thunderbird restaurant after the Saturday evening concert.

Smithsonian magazine, itself in its own inaugural year, reportedly lauded the festival in its July, 1970 issue, including complimentary quotes from Adderley and Quincy Jones, as noted by the Daily Illini.