On Thursday, December 6, the band performed in the Great Hall at Krannert Center for the Performing Arts in Urbana. Advertisements for the concert in the Daily Illini described it thus:

The band returned to the Great Hall on Thursday, January 31, 1974 for a concert held in conjunction with the Annual Mid-Winder Meeting of the Music Library Association.

Brian Sanders recalls his first year on the band:

I joined the band in fall of ’73. In the saxophone section John Hutchins played lead, Eric Schneider (who I think also joined the same time as I) played second. Karel Lidrell and I were the tenors and Ed Petersen was playing bari.

I recall the trombones were Bob Samborsky playing lead and John Sexton was playing bass bone.

For sure Ken Ferrentino and Jerry Tessin were in the trumpet section, Ken playing most of the lead parts. There is a good probability that Art Davis was also in the section, also Jeff Kaye, but not sure how regular. There was at least one other. Oh, and Steve Jensen.

Rhythm section was Mac [Jim McNeeley], [John] Burr and Charlie [Braugham].  Not sure about the guitar chair, nor tuba and horn positions.

That band went to Pennsylvania for a weeklong tour in the spring that year.  First concert was a Saturday night in Oberlin.  The personnel was slightly different.  Karel was student teaching and Dewar was on the tour.  I don’t recall if he played the entire semester or not. I do remember being pretty terrified at having to play “Doodle Oodle” with him.  I’m pretty sure Terry Pettijohn also made that trip playing both horn and banjo on Beelzubub and Nate Banks was in the trumpet section. Ed London may have also gone on that trip.  I certainly remember him playing with the band a couple times at the T-bird, including one memorable time he was given a couple choruses of blues on something.  He stood up and preceded to work his embouchure, eyebrows, face and body in a hilarious manner.  Only at the turnaround of the second chorus did he finally produce a sound of any kind.  On post horn.

A reel-to-reel recording of selections from the tour of Pennsylvania tour surfaced in March, 2015. Included in the tape box was a list of selections and the locations at which they were recorded: 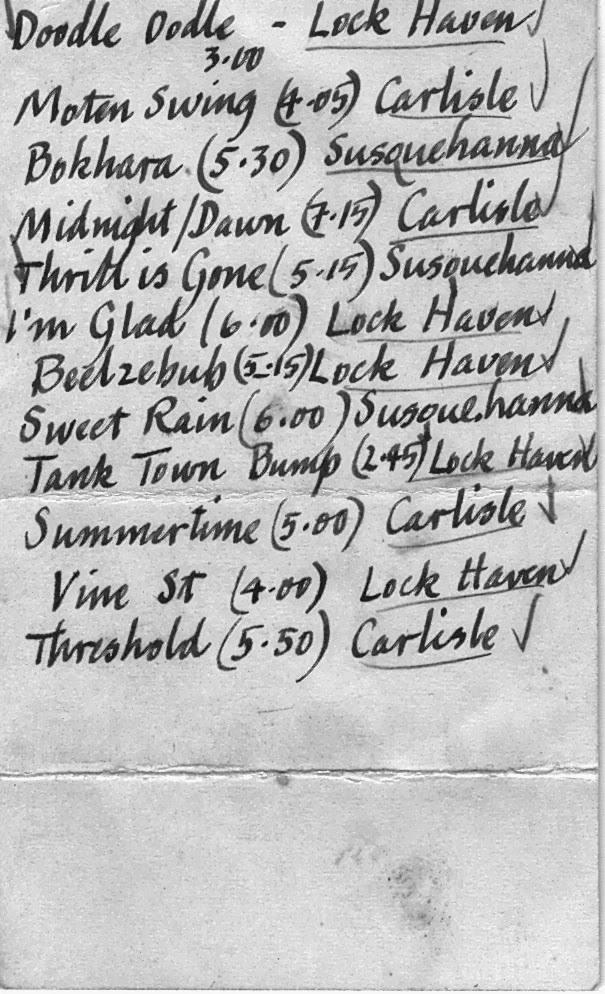 The card reads:
The actual track listing is as follows:

On 7/31/1974, the band performed at The Thunderbird in Urbana. A two reel-to-reel tapes labeled as having been from this performance also surfaced; while one of the tapes appeared to have been scrubbed for the aforementioned compilation from the Pennsylvania tour, both boxes still contained labeling which document some of the material which was performed:
The actual track listing is as follows: