In an interesting first, Garvey and the University Jazz Band were secured to play in place of the standard pit orchestra for the annual Dad's Day Revue held in November. Garvey, acting as musical director for the "Lights in Lit" event, would conduct the band as it backed 15-minute "stunts" which were billed to be "jazz-themed". 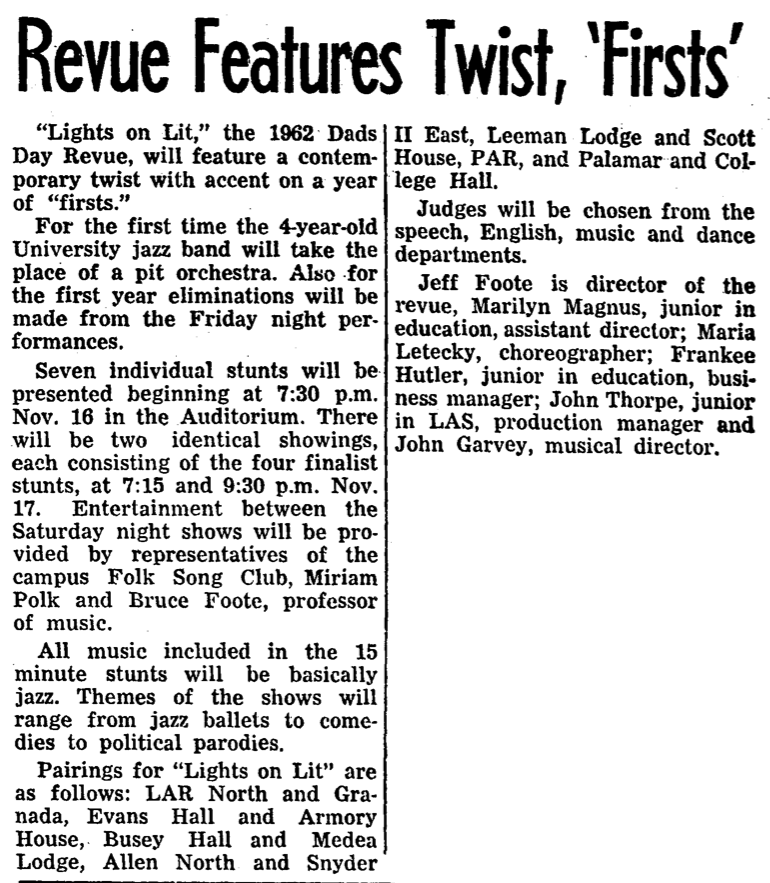 
Finally, on Wednesday, December 12, from 8-10pm, the Jazz Band performed at the Illini Union Ballroom for its final concert of the calendar year. 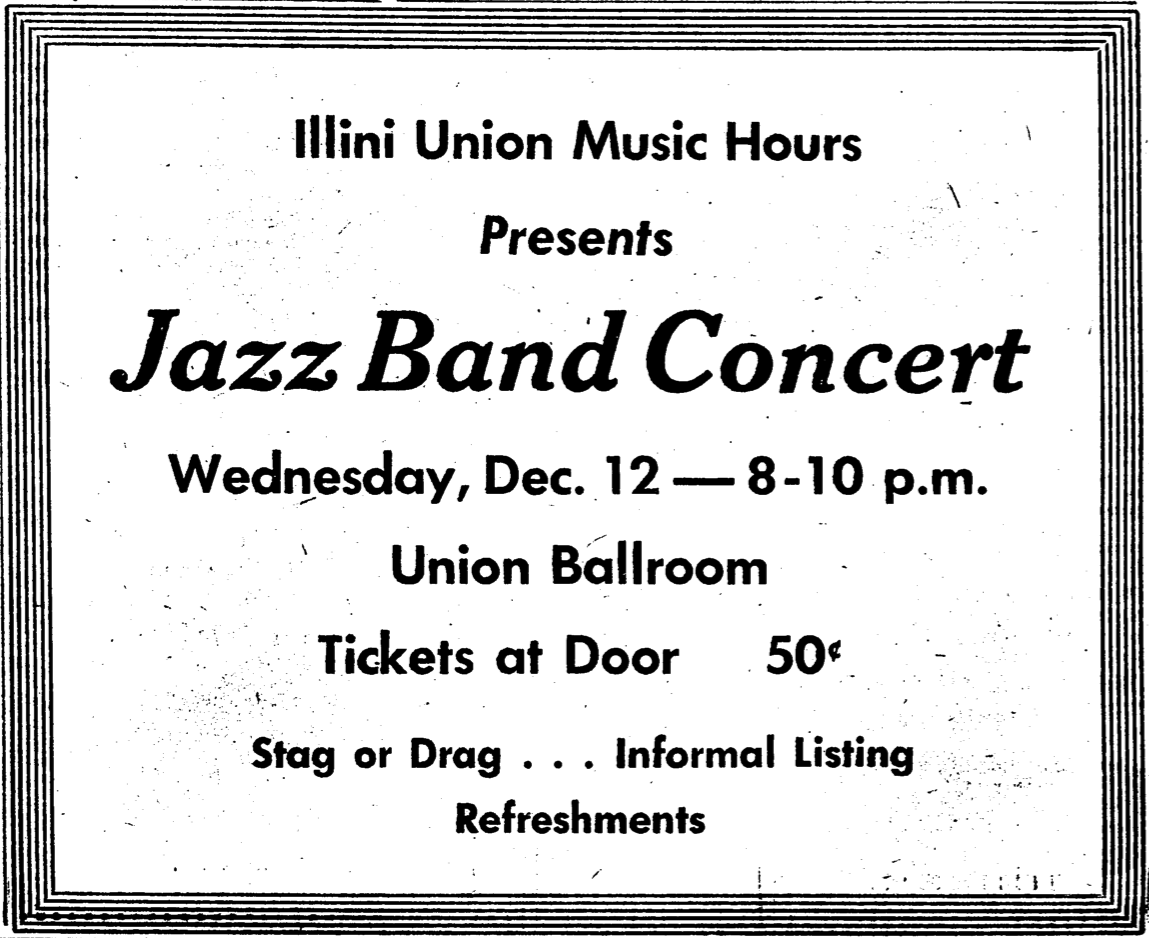 
1963 would shape up to be another interesting year for the band - more playing opportunities and visibility, another concert with a major jazz artist, and a strengthening of the band's relationship to the Illini Union via Jazz-U-Like-It.

With the beginning of the year came the announcement that the band would be one of the musical acts to participate in the opening ceremonies for the new Assembly Hall on the south end of campus. One of these concerts would reunite John Garvey and the band in backing trombonist J. J. Johnson, who had appeared with them in concert in 1962. 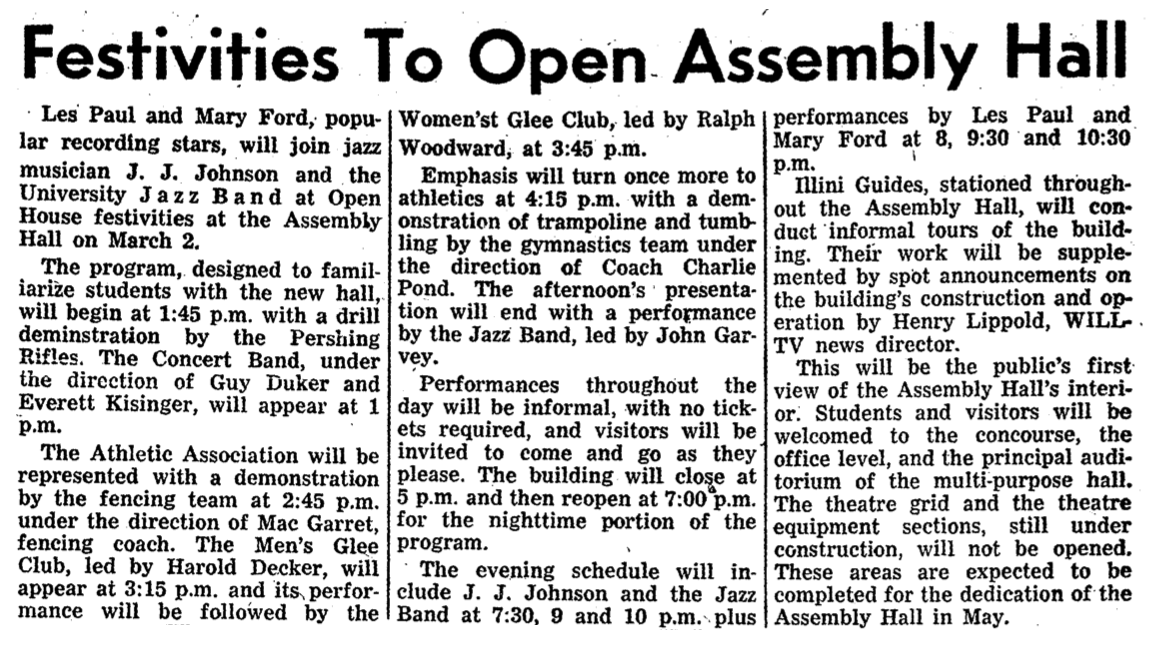 The Daily Illini later reported that 40,000 people had attended the open house, which featured tours of the new building in order to orient people on how to navigate the new facility. This building, in addition to offering functionality as a sports venue, was also seen as a way for Star Course to bring in national acts and attract larger numbers of students (and the public) for more reasonable admission prices.

Next up would be a return of jazz to the biennial Festival of Contemporary Arts on March 10, with the band backing up the nationally recognized woodwind player Eric Dolphy. The concert would feature Dolphy's own group (which included Dolphy on tenor saxophone, flute, and bass clarinet; Herbie Hancock on piano; Eddie Kahn, bass; and J. C. Moses, drums), the University Jazz Band playing compositions by students and faculty, and a special ensemble which would back the quartet.

In the afternoon receding the concert was a round-table disussion on "Approaches to Improvisation" in Smith Music Hall. The panel included Bream Turetzky (director of the Hartt Chamber Players), composer Robert Erickson, pianist Dwight Peltzer, composer Barney Childs, and Dolphy. 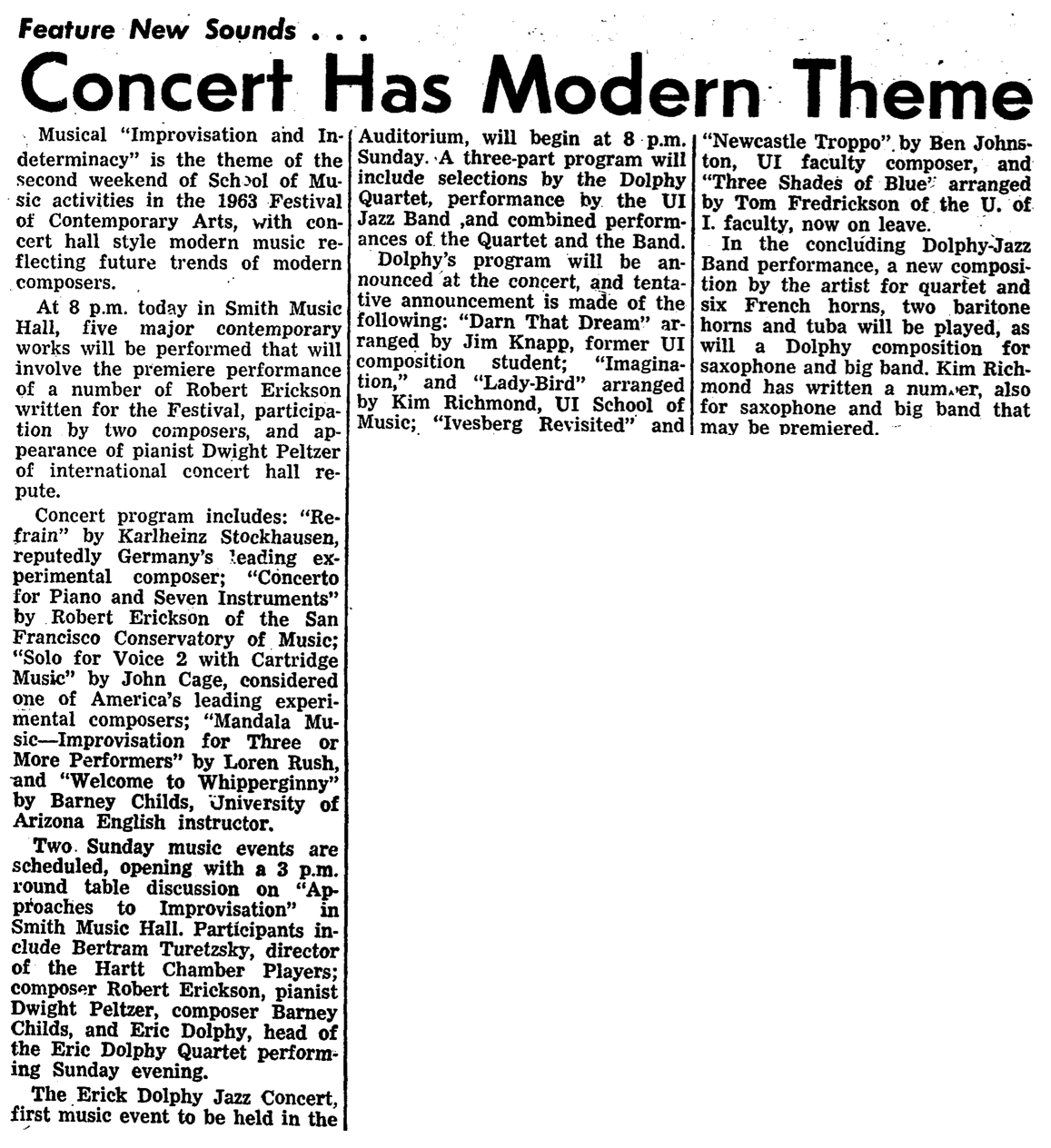 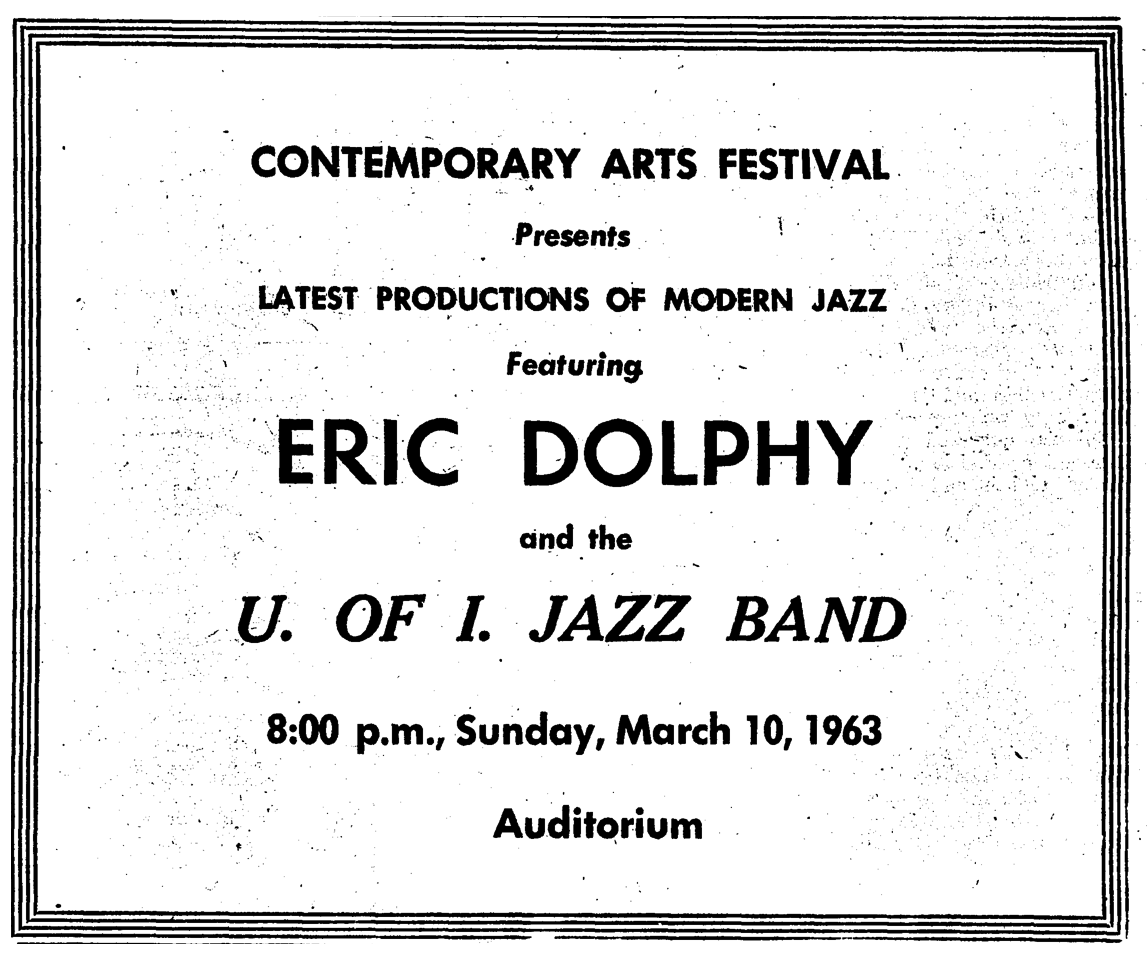 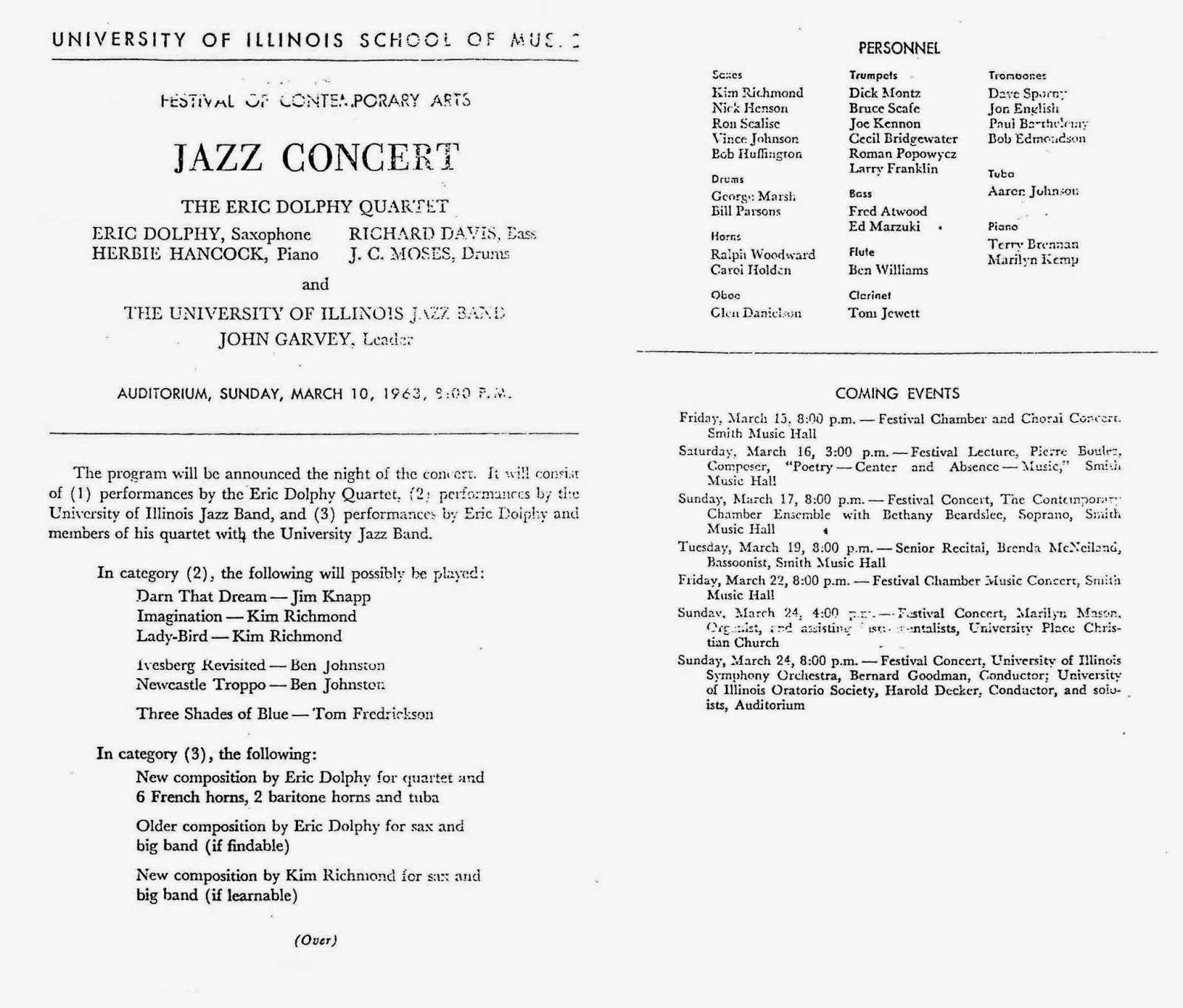 The review which followed in the Daily Illini on March 12 suggested that the reviewer found Dolphy to be highly inventive, but found the quartet's performance generally long-winded and somewhat dry. As far as the ensemble arrangements, the reviewer found them interesting, but inferior to the arrangements selected for the program by Garvey ("Three Shades of Blue" by Tom Fredrickson, and "Ivesburg Revisited" and "Newcastle Troppo" by Ben Johnston). 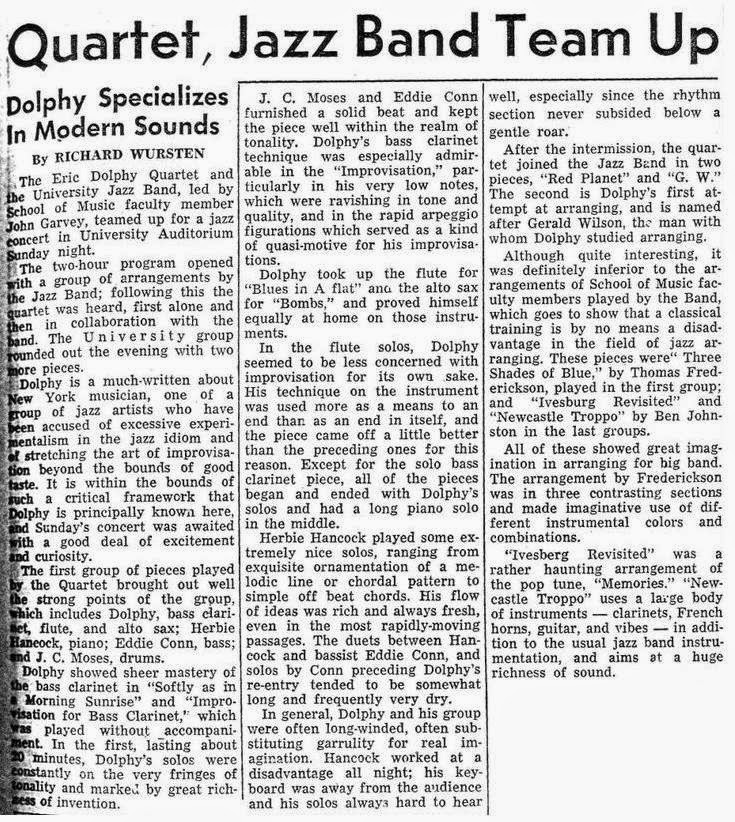 A recording of this concert was not released until 40 years later or so on the Blue Note label (though bootlegs had been procured and exchanged through a network of Dolphy enthusiasts. Upon hearing about the release of the recording in 1999, Garvey was prompted to request a $2,500 honorarium he felt he was due for organizing and performing in the concert. It's not known if he was ever compensated. 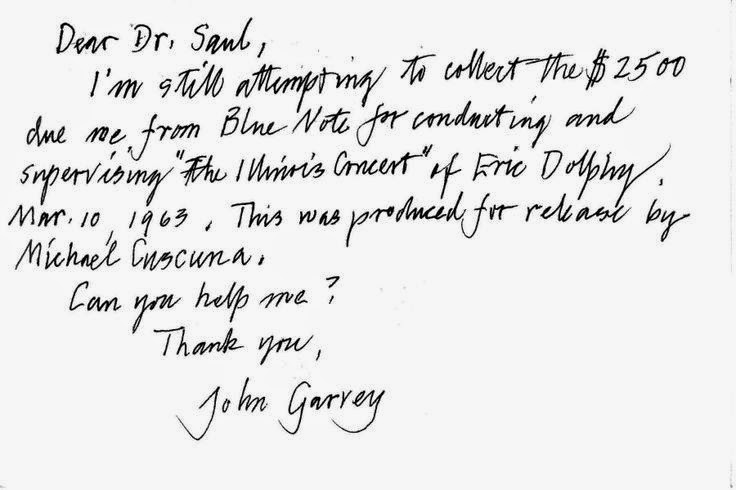 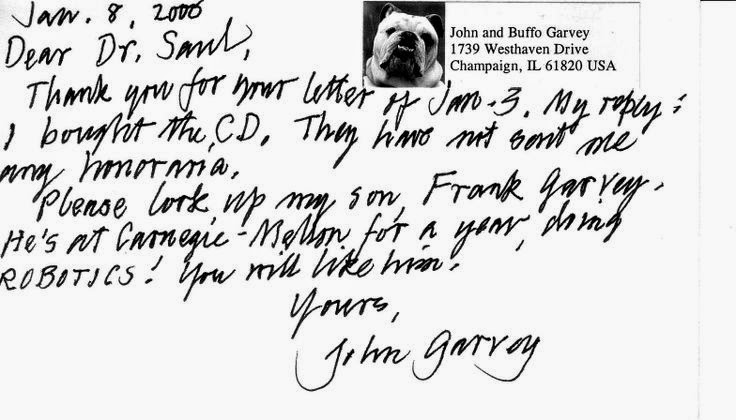 The Sousa Archives hold a recording from the band from May 15, 1963. It's unknown where this concert occurred; selections indexed on the recording include "Lady Bird" (arr. Richmond), "There Will Never Be Another You", "I'll Remember You", "Summertime" (aka "Other Summers", Knapp), "Damn their Dream" (presumably "Darn That Dream", arr. Knapp?), "Ivesberg Revisited", and "What Is Thing Called?" (presumably "What Is This Thing Called Love").

Following the Dolphy concert, Garvey and the jazz band were back to scheduled performances in conjunction with the Illini Union. The first of those concerts was jeld on May 26, 1963. 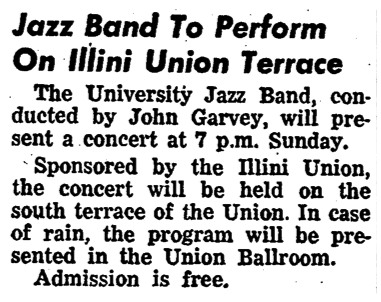 A review of the concert in the Daily Illini on May 28 suggested that the open air environment wasn't the best way to enjoy the band. Kim Richmond's small group played one number following the intermission, and the band backed vocalist Criss Prevost on three numbers. Also worthy of note in this article is the first mention of Garvey's intent to record, tour (Chicago), and enter the next year's ensemble in the Notre Dame Collegiate Jazz Festival. This appears to be the last concert for the 1962-1963 band.