On March 10, 1975, the band appeared at Foellinger Auditorium with guest soloist Cat Anderson. This concert was sponsored by Star Course. 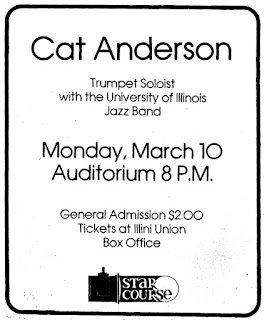 On March 18, 1975, the band performed a "Festival Concert" (along with the UIUC Wind Ensemble and Symphony Orchestra). A recording the concert is held by the Sousa Archives (box 123, reels 3-4). Likely selections involving the band were "Music for Orchestra and Jazz Band" and possibly "Light and Shadows" (Morgan Powell).