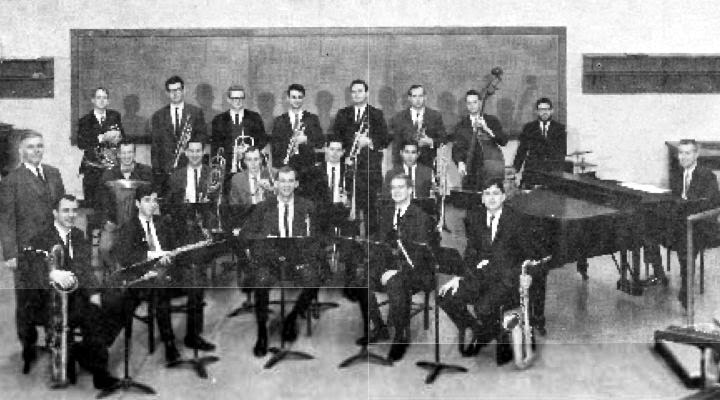 On July 28, 1966, the band conducted a recording session. A copy of this is held by the Sousa Archives (box 82, reel 7). The material recorded is not yet known.

On February 23, 1967, the band performed at the Collegiate Jazz Festival. A recording of this concert is held at the Sousa Archives (box 83, reels 5-7).

On February 28, 1967, the Jazz Band performed at the Northern Illinois Contemporary Music Festival. A recording of this concert is held at the Sousa Archives (box 5, reel 4). 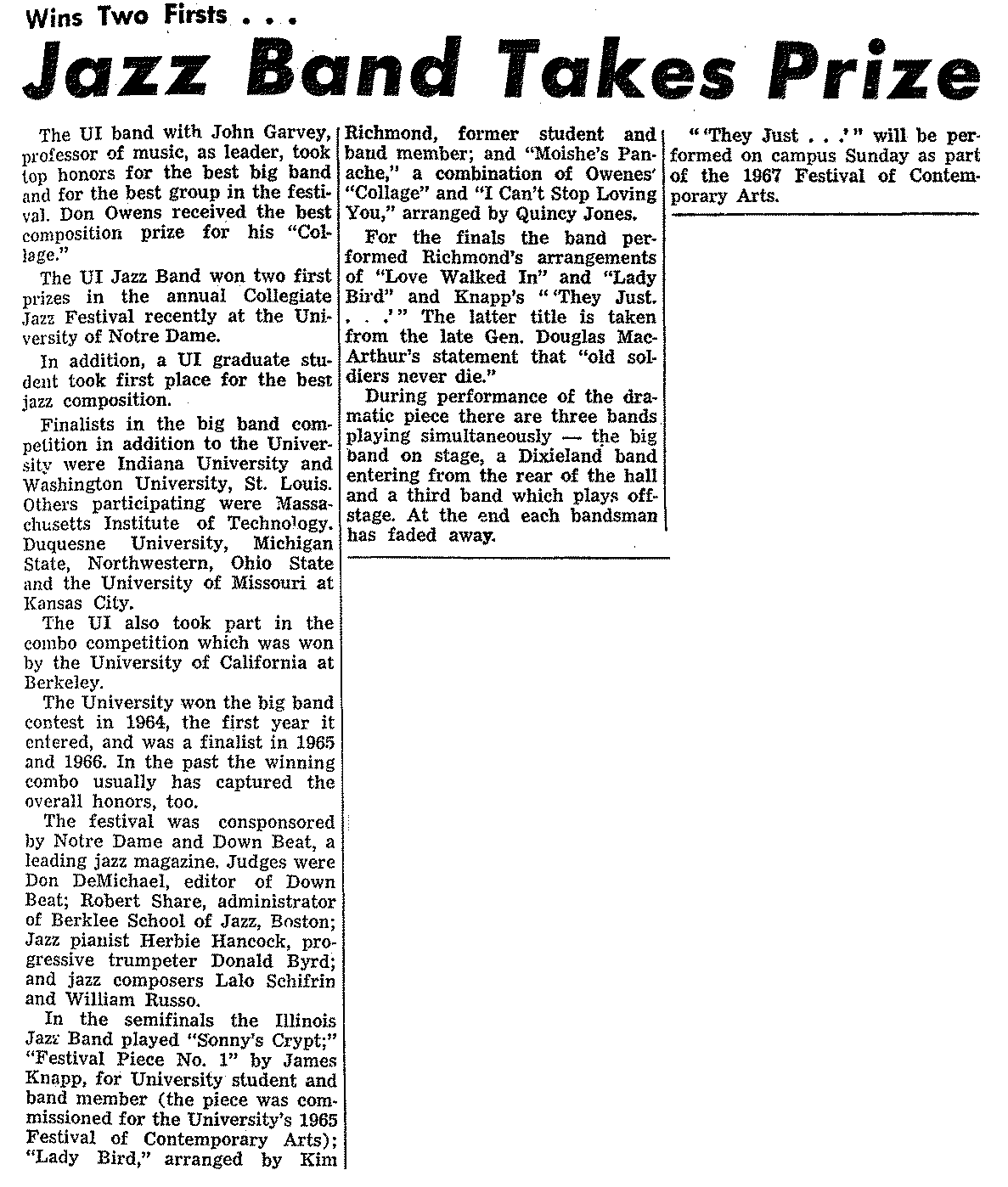 The semifinal and final concerts were released on vinyl. (Additional details on this recording may be found in "The Albums" section.)

Band member Jerry Tessin described the event in this way:

We were at the Collegiate Jazz Festival in, I believe, 1967 [sic], and the Indiana band won the competition. And we were in the dumps about that. So that Sunday morning, after the Saturday night competition, we were sitting in the Blue and Gold Motel (South Bend, Indiana) coffee shop—Jim Knapp, Ron Dewar, John Garvey, Larry Dwyer, me, and a couple of other players—discussing how we felt let down and what we could do next year. We just started talking about the concept of a composition that would involve a lot of different things. 'Long about November or December, Jim Knapp brought in a chart he called "They just…" based on "Old soldiers never die, they just fade away." It was typical Knapp stuff—a lush, beautiful tone poem. And we started rehearsing this thing and it began to evolve over the next month or so. John decided that he wanted a brass group in it that would improvise brass chorales. And we decided that there would be some theatrical aspect based on the idea of a New Orleans funeral band. And then John was very much into gestures and was interacting with somebody from the Dance Department. So the next year at the CJF, we kept things pretty much under wraps until we knew we made the finals. Then John assigned one person to the lighting people, and one person to the sound guy. Indiana and North Texas State had already played, and everyone was wondering what Illinois had up its sleeve, so there was all this anticipation. The band got onstage, and I could see the line of judges from where I was. We started out with this lush tone poem and it got really dense. Then all of a sudden, you started to hear strains of a Dixieland band from the back of the hall. I was watching the judges turning around wondering what was going on. And just as they turned, the spotlights hit what I can only describe as a caravan. Two guys were carrying the bass saxophone case, which looked like a coffin. And the Dixieland band marched down the center aisle, very slowly, playing some type of strutting music. They went down in front of the judges, turned, and went back out. This probably took 3-4 minutes, as the Jim Knapp piece continued evolving onstage. And while all that was going on, the soft brass left the stage and began improvising German chorales. And the judges' heads were spinning as they heard three different kinds of music. And everybody was serious with it. Then the brass chorales faded away and we got a rhythmical riff going onstage, and then we began dropping notes randomly, but pantomiming the notes we weren't playing. So as the Dixieland band diminished, the brass group diminished, and suddenly the sound volume on the stage was diminishing and the melody was fragmenting because the players were going through the gestures of playing their horns but there was no sound. Finally there was no sound on the stage but the gestures of the band, and then the players started leaving the stage. That left Charlie Braugham, on drums, all alone, going through the motions of playing the drums. And as he got up to leave, a drumstick flew out of his hands, hit the floor, bounced tremendously high in the spotlight and came down leaving absolute silence. There must have been about 10-15 seconds of absolute silence and then cheers and applause that went on for 10 minutes. I've never heard an audience reaction like that. Some of the other band directors reportedly left the hall with colorful expressions, saying how their bands just played music so how could they compete against this! It was just unbelievable, a once in a lifetime moment.