By the fall of 1960, Garvey had apparently approached the Illini Union Board to try to broker a cooperative sponsorship with the School of Music. In October, an announcement appeared in the Daily Illini. The School of Music would pay for purchasing music for the group and handling other expenses up to $150. Anything over and above that would be covered by the IUB, which would also handle personnel and organizational arrangements, and promote the band's performances.

Also included in the announcement were a projection by Garvey for two concerts for the 1960-61 school year, with trombonist J. J. Johnson having agreed to appear as a guest artist. Garvey had gotten his ensemble, now it was time to audition players and get to work rehearsing. 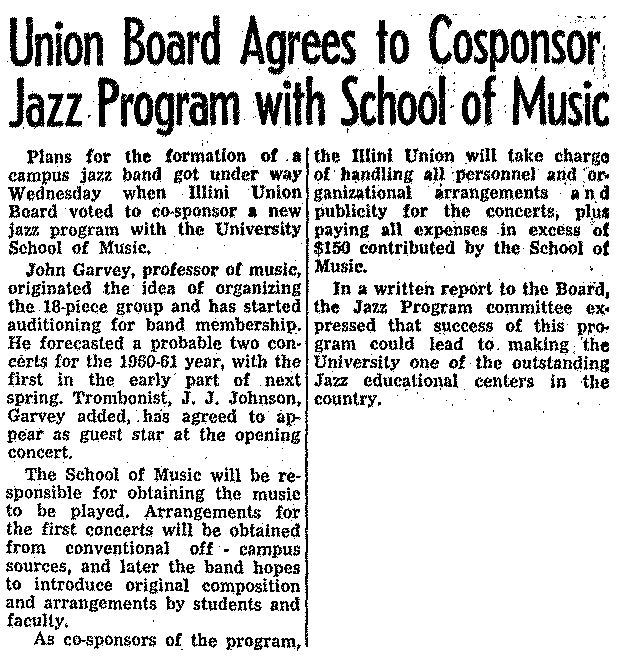 Before this band would premiere, however, Garvey was involved in the final iteration of the Lenox School of Jazz, a seminal workshop which took place from 1957-1960. Formed by John Lewis (Modern Jazz Quartet) and contributed to by Gunther Schuller (composer/musician), with whom Garvey had collaborated in 1959 on the campus of the University of Illinois, this project was one of the early attempts broaden the institutionalization of jazz education.

While there's little in the way of documentation and photographs of the 1960 workshop, a review of the program from the benefit concert held on September 1, 1960 shows that Garvey appeared to be involved as a musician on the pieces that integrated jazz with classical elements ("third stream music"). Pieces in which he participated included Bob Brookmeyer's "Champagne Blues" and Gary McFarland's "Piece for Strings" (featuring trombonist J. J. Johnson, who would later appear as a guest on the University of Illinois campus), Gunther Schuller's "Variants on a Theme of John Lewis" and Jim Hall's "Piece for Guitar and Strings" (featuring guitarist Jim Hall, who would also appear later at the University of Illinois), and Ran Blake's "Piano Solo" (featuring Blake, and including bassist Chuck Israels, with whom Garvey would work more closely in the 1980s).

Other notable jazz performers involved with the 1960 workshop included trumpeters Freddie Hubbard, Herb Pomeroy, and Don Ellis; tenor saxophonists Jamey Aebersold and J.R. Monterose; pianists George Russell and John Lewis; and vibraphonist Gary McFarland (who would collaborate with Garvey later on concerts in Urbana as well as New York City). Clearly, relationships were being formed which would serve the Illinois program later.

Garvey then returned to work with his new ensemble. The first concert by the band would be held as part of the weekly Thursday morning School of Music convocation, open to the public. 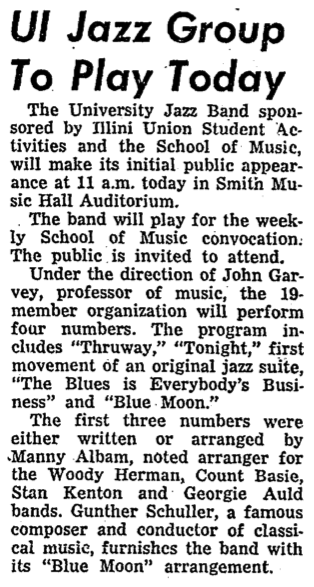 This first version of the band would not take a conventional form. The material presented included three arrangements by Manny Albam ("Thruway", "Tonight", and "The Blues is Everybody's Business"), plus one composition by Gunther Schuller ("Blue Moon") which had probably been performed at the Festival of Contemporary Arts concert the previous year. The ensemble swelled to as many as 20 players at times, including french horns, tubas, and electric guitars (!) in addition to the more conventional configuration. The reviewer lamented the somewhat weak solo work, but identified solos by Danner Shoemaker (tenor), Tim Byrne (bass), and Ric Bendel (trumpet) as deserving of praise.

A copy of the score and/or parts to Schuller's arrangement of "Blue Moon" are included in the John Garvey Music and Papers collection at the Sousa archive on the Illinois campus.

With the band's debut performance behind it, John Garvey and the University of Illinois Jazz Band began ramping things up with additional performances. On March 20, 1961, the band performed a program billed as "Jazz for Blue Monday" in the Illini Union Ballroom.

On April 15, 1961, the band performed an afternoon concert as part of the fourth annual Sheequon celebration ("sheequon" reportedly a Menominee Indian word meaning "spirit of spring") on the steps of the University Auditorium. 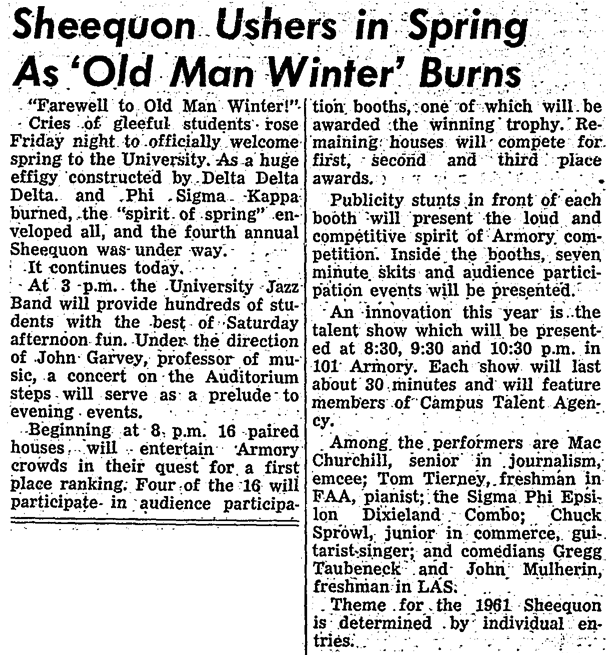 On May 23, 1961, at 8pm, the jazz band presented what was reported to be the first outdoor jazz concert in the history of the University (despite the preceding Sheequon concert?), in front of the Auditorium. The program was billed as "Jazz Under the Stars featuring the University of Illinois Jazz Band, directed by John Garvey", and was reported to include "'old standards,' sprituals, and '3rd Stream Jazz'". 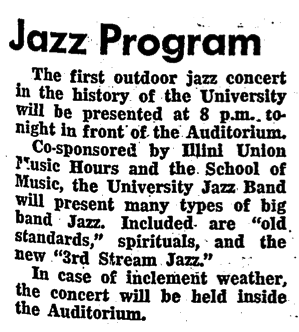 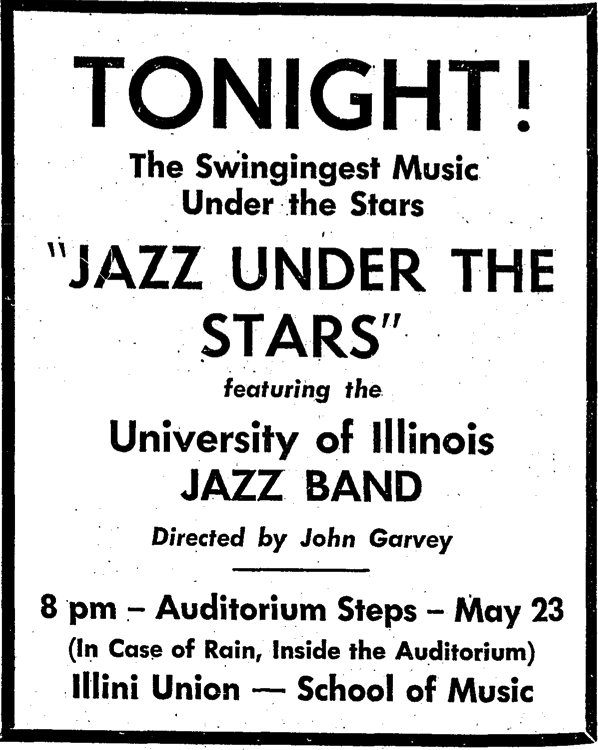 In the first complete school year of the band's existence, then, the band performed four times (Garvey had predicted 1-2 concerts in October of 1960 when the Illini Union co-sponsorship was announced).